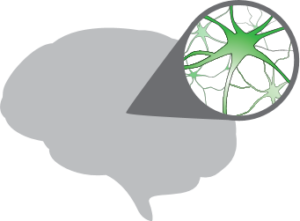 An innovative, patent-pending powder blend of ginsenoside Rg3 and nicotinamide riboside along with components to aid in solubilization and dispersion. These ingredients are designed to be used in the support of neurological health and cognitive health. Synapsin® is commonly used in combination with methylcobalamin and hydroxocobalamin in formulations to support neuronal function and cognition.

BRAIN DISORDERS: More than one million adults in

the U.S. are diagnosed annually with a chronic brain disease or disorder, with Alzheimer’s disease being the most prevalent cause of adult-onset brain disorders. Research estimates that in the U.S., 35.8% of those 85 or older have moderate or severe memory impairment, and individuals 85 years and older are the fastest growing segment of the population.

BRAIN FOG: Brain fog symptoms can vary from person to person based on mental and physiological condition(s). Brain fog can cause mild to chronic mental confusion, the inability to focus, and poor memory recall. It can also be associated with autoimmune diseases, lifestyle stress, cancer treatments, aging and more. Brain fog may also be commonly referred to as “brain fatigue” which may be linked to essential nutrient(s) deficiencies.

NEUROPLASTICITY: Neuroplasticity is the brain’s ability to reorganize and create neural connections. As we age, neuroplasticity can decline and an increase in neurodegeneration can occur, with oxidative stress as a major factor. Oxidative stress can be attributed to brain aging and memory impairment, and can also be hastened due to environmental and nutritional toxins.

4. Bieganowski, P., & Brenner, C. (2004). Discoveries of nicotinamide riboside as a nutrient and conserved NRK genes establish a Preiss-Handler independent route to NAD+ in fungi and humans. Cell, 117(4), 495-502. Retrieved from